Online games, how to get online, and anything involving Dreamcast online can be discussed here.
Post Reply
34 posts

First of all, I got a Macintosh and not a PC. At one time it was playing the role of a PC, but I had security issues on the PC side, so never again.

I tried to take the file and just drag and drop it into the boot disc. It said it was too large. My SD card is 4GB

i don't know what exactly I'm doing at this point, but what do know is this: I only have the fastest land-based connection I can get i 2019, and it even doesn't qualify as broadband by the 2010 standards (3Mb/s in, 1 Mb/s out) for the purposes of federal broadband subsidy funding. When i tried clicking on a file, there was something called Zipeg. I don't know what it does or how to use it but that's the key.

Second Question, about running the Raspberry Pi I thought it was supposed to run as a computer broadband-to-dialup bridge. Before I was able to connect with the ethernet cable in the port for web browsing, but not for gaming online. I want to game online.

Someone said I needed a separate modem and router, and that I have to make either the Dreamcast OR the DreamPi (there's a difference IP-wise?) a DMZ. I think I tried both and neither worked.

Then someone suggested the only solution was getting a WiFiPi. Since mine is not a native WiFiPi, i was thinking of using a Vonets.com device as an Ethernet<->WiFi Bridge. When I plugged it in it didn't work.

Then I tried my Macintosh to see if it would act as a wifi device when plugged into the mac's ethernet port. After 24 hours and kind of cryptic Chinglish I eventually found out to turn off my WiFi reception on my Mac, plug it in and use the IP address, 192.168.254.254, which conflicted with my homer wifi.

I think i got it in bridge mode, because I was able to access website with the Mac's WiFi Radio off and the Vonets device plugged in.

Now come the issue of the Dreampi. When i tried plugging in the Vonets device i the ethernet, the modem green lights wouldn't come on. So I tested the modem in the mac USB plug. The green lights flashed with one green light on steady with no dial up connection plugged in. So the modem is okay.

i don't know if my software got scrambled with the Vonets device, or if something is more permanent damaged on my Dream Pi. So I took out the SD Card, and am trying to load the DrewamPi on.

There are no clear instruction on what to do once I get the download.

Do I have to re-download it? (another night bites the dust) What do I do once successful?

It also talks about running the Pi to do two different things. First I assume I need the WiFi file in the boot. Second, I have Sega Swirl, and got a Gmail account just for Sega Swirl. I got that file, but I don't know what to do with that.

It talks about typing in stuff. I don't see a place where I can place my keyboard. There is no Dreamcast control port for the Typing of the Dead Keyboard. I see 2 USB ports. Should I assume a USB keyboard needs to be plugged into the Dreampi when typing those commands? Second it talks about plugging into a TV. I see one RCA and a purple connector. Is that the video out? is the purple the Audio? Is that for stuff that require CRT-quick ping times?

I see one other port. I think it might be a HDMI port. Is that an output from the Pi, or is that meant to be an input form another device? Also there are a couple wires running from the corner of the port. I don't know if THAT'S going to ruin anything.

Remember, this was a homemade DreamPi that I traded a SPARE Xbox 360 HD DVD Player in box with everything plus a couple of other things to get a DreamPi. these 2 wired go into as little plastic ball, which I will not expose, and from there one end runs into the Dreamcast Modem port, and the other runs into the Dial Up USB Modem's Telephone port. There is a USB port which I believe is for power, but it's a little too loose for my liking. I can't tell whether it's a mini or a micro, see whether it's the port or the cable that's loose. I plug the other end into a USB->AC outlet adapter. The Vonets device plugs into the other half of that power block device via USB.
Top

Sorry, just explaining my complex situation in hooking it up.

Step 1, I downloaded the Dreampi 1.7.7z and ran it through Zipeg and extracted it, where a Dreampi1.7.7. img appears, and placed it in the main boot portion of the SD card. along with the 2 other files for WiFi and for Sega Swirl.

Now when I run My DreamPi through either the HDMI input or the Composite Video input, there is a totally black image on the screen. My HDMI splitter says there's a signal running through becuase the light was on my HDMI switcher.

So i don't know what I'm doing. I got an SD card, formatted it in MS-DOS Fat, (I couldn't find a FAT 32 option on my Macintosh, maybe that is an issue...) and the screen is totally black.

Is there something else you have to load besides Dreampi and the 2 helper files? The power is on, it's transmitting a TV signal, but it's totally black, regardless of whether the dreampi SD card is in or not. None of the videos give you direecitons on what to do.
Top

well 1. you have to WRITE that dreampi 1.7 image file To the sd card, not just place the file on the memory card. try and find an image writer program I bet its built in on macs somewhere in Disks maybe?

So if the dreampi image was not correctly written to the sd card, the pi won't load it thus won't show anything on the screen =)

Hope that helps so far

Okay, just read you now, but I found something by searching the dreamcastic videos. I found the Mac link in the description. Then I found a program called Etcher. I ran it. and flashed dreampi onto the SD card.

I assume that's the basic finish. All the other details are for advanced users. But I got 2 things that may require advance use.

First of all for these 2 uses, must I use the Dreampi's video interact, or can I interface with theDreamPi Image while in Mac Terminal Mode. I know enough about command line know any wrong key can mess up your program in incalculable ways. (the "joke example" from Applesoft Basic is "RUIN" instead of "RUN", with the U and I so close, that could happen :p ) I'd just like to hihglight, copy and paste, and do slight editing if necessary.

1) WiFiPi: The Dreamcastic vdeo suggests using as USB based WiFi device. Is there anything special I need to do to run an ETHERNET based external Wi Fi bridge, like the Vonets.com device. I did the first part, made sure the Vonets device works on a Macintosh with the WiFi radio turned off.

2) Do you have to DMZ a Wireless to wired bridge? I don't see an option in the Vonets device, and I read somewhere that WiFi based Dreampi connections work on all games without DMZing it. By the way, I have a Frontier DSL Netgear 7550, and I read somewhere that someone may have mixed up DMZ and one other funciion. Some are corrected, some are not, and there's no way to retroactively correct it, you just have to manually compensate for it.

3) Sega Swirl Gmail - I think I understaad the instructions, but running it on Apple Terminal may be better just for copying and pasting.

Hello @TacT, I’m now just wondering what to do about my 3 issues I have, WiFiPi, DMZ, and Sega Swirl Google.

Can I copy and paste the commands on my Macintosh Terminal, to avoid mistyping issues? And would that be easier that doing it on the Pi itself?
Top

tripletopper wrote:Hello @TacT, I’m now just wondering what to do about my 3 issues I have, WiFiPi, DMZ, and Sega Swirl Google.

Can I copy and paste the commands on my Macintosh Terminal, to avoid mistyping issues? And would that be easier that doing it on the Pi itself?

You need something that can login to the pi from mac. I use puTTY for windows. I have no idea what mac users can use. Then u can copy and paste commands that way.
Top

Hello Xiden, Mac Terminal is basically Unix. Can I put the Dreampi disc in the SD slot, copy the commands I need on GUI based websites, and then paste then into Terminal?

Are these terminal commands different because inside the PI, you’re doing self-surgery, vs on the Mac the Macintosh is operating on the Unix Pi Disc?
Top

tripletopper wrote:Hello Xiden, Mac Terminal is basically Unix. Can I put the Dreampi disc in the SD slot, copy the commands I need on GUI based websites, and then paste then into Terminal?

Are these terminal commands different because inside the PI, you’re doing self-surgery, vs on the Mac the Macintosh is operating on the Unix Pi Disc?

Raspberry pi is linux based. You tty into it and and login like you would if u plugged it into a tv set. But with a terminal u can copy and paste commands. What commands are u wanting to do?
Top

You need a tool called ApplePi Baker, this flashes the image to the sd card, once that is done, you're ready to go. it's easy as pie (pun intended), you select your sd card on the left side (blue), browse to the image where it says IMG file on the right, click restore backup & wait. Takes 2 minutes or so, your sd card is now ready for your raspberry 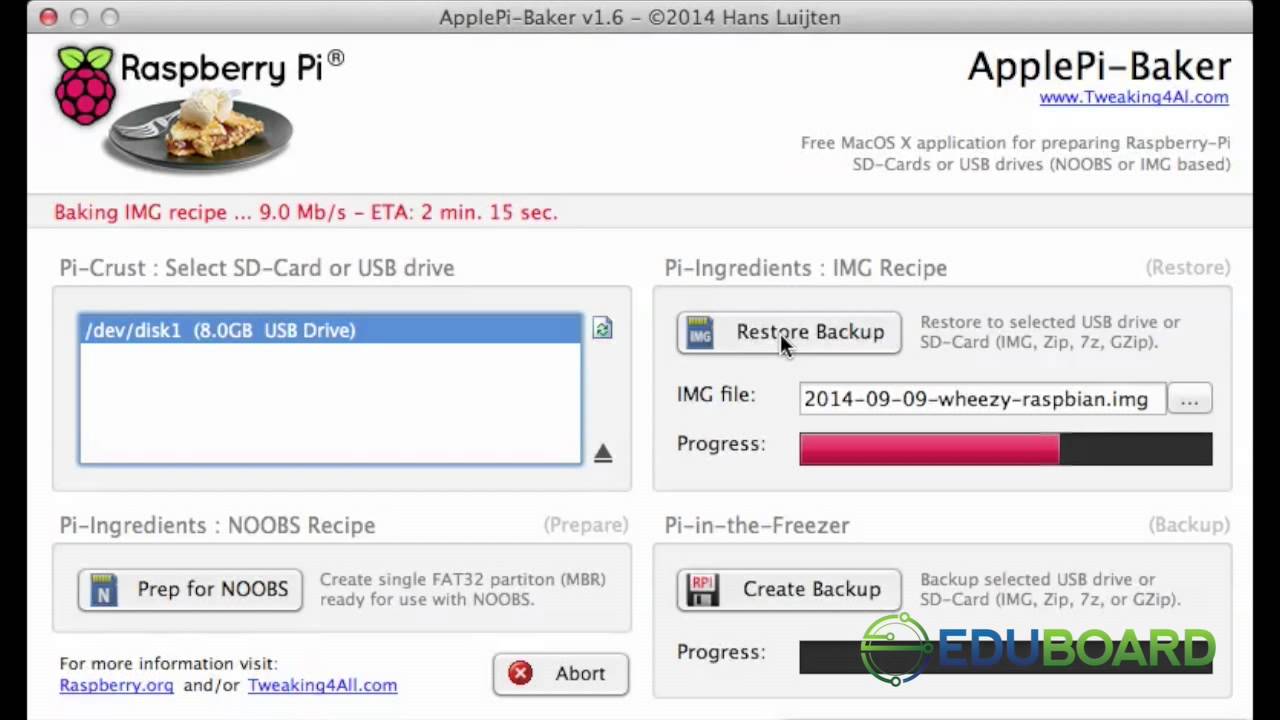