Menu is there in case the user wants to customize it

I also have a gui program to automatically insert 0GDTEX into GDI and another one to apply GDISHRINK inplace (GDMENU Card Manager only applies when adding games to SD card).
Used them only a few times. Not released as I don't know if they are stable enough. Might share them if anyone wants.

I will give it a try
From love, with Russia

Thanks for the update

Still I have the problem of randomly deleting folders all the time.
All folders are GDI images and one CDI.
With GDEMU_SD, this problem does not occur.
How can I deal with it so as not to delete them? 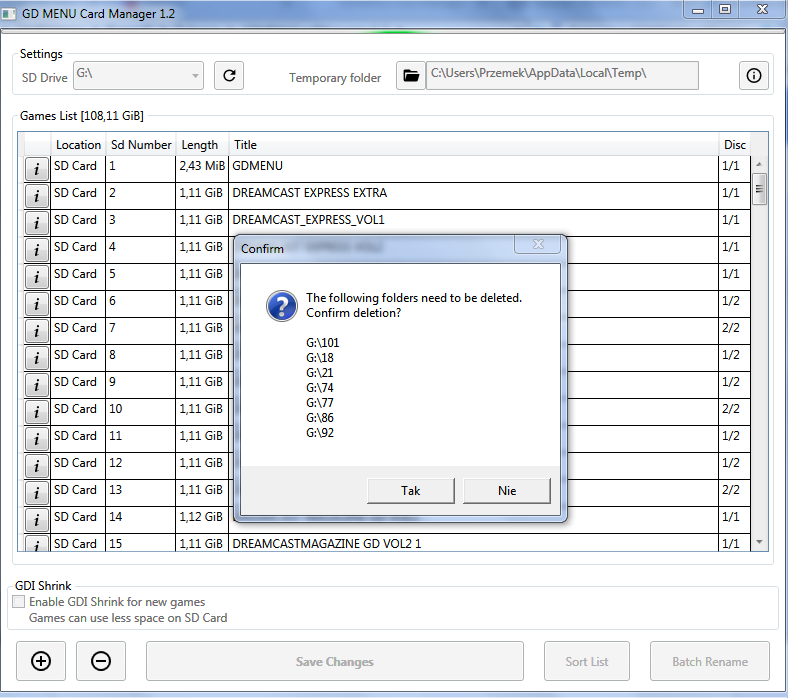 deluxux wrote:Is it possible to release Mac and Linux versions in the future?

Hey @sonik, I registered here just to thank you for making this software. I was using the old SD Card Maker for GDEMU by madsheep and was losing my mind. My 256gb card would take 2 minutes to load EVERY time I restarted my Dreamcast. Your GD Menu Card Manager literally fixed it so it loads instantly upon bootup. All I had to do was open your software and resave. It fixed the delay perfectly. Thank you so much. Wished I knew what it did to fix it for my knowledge and understanding. But right now I'm stoked. Excellent work.
Top

@Okinawa I'm glad it worked for you!
Please help spread the word about it

By the way, I'm working on a new version with support for CCD and MDF files too. And hopefully it will be for multiplatform (win/linux).
EDF! EDF! EDF!
Top

Testing this out now because my GDEmu is slow as hell.... 2 minutes loading time? I dream of 2 minutes right now! Mine is taking about about 4-5 minutes to get into the boot up screen (load/vmu/clock/etc) and then it's just freezing... well, taking an eternity to do anything. I'm way beyond 2 minutes!

So, I decide to give this a shot and I get "ERROR: the media is write protected" - this card used to work fine with MadSheeps tool - but since I opened my DC to fit a Pico PSU I'm just getting the slow, dare I say it, eternal, load up times.

The 128gb - in both MadSheep and this tool both give me the error "media is write protected" - and this card worked fine a month ago with about 10 games on it. Now neither tool recognise it properly.

Okay, tested 32gb (formatted fat32) and no dice... still just hangs at the blue screen for ages then, eventually, load to DC startup menu, then just hangs on "please wait while disc is being checked"... at which point I turn it off - it's no good if it takes 30 mins to load the menu, even if it does load eventually (which I am doubting)

So... plan B - I have another DC which I'm going to dismantle and see if the GDEmu behaves any differently.

I've said it before and I'll say it again, this is categorically the worst mod I've ever crossed paths with. Heck, even the vintage (really early) PS2 mod where I had to hammer the power button 5 times, then do a super fast disc-swap as the original boot disc came flying out, spinning at 400mph, was still more fun than this. At least I could actually 'play' the games with that disc-crunching modification. This GDEmu has been one brutal headache after another. Sure, when it works it's great! But the key is getting it to 'work'.

Sorry to grumble here but I need to vent my woes... I'm tearing my hair out with this thing and I don't have many hairs left

Edit... okay, I hope this helps others here - CHECK THE GDEMU PCB! - I spotted a tiny blob of solder on the chip (not the one directly next to the SD card slot - the other one (of the two) I just scraped it with a screwdriver and it booted up straight away

Edit 2... had to nip off to do some work for a while. Came back, took it out and did some more scraping, put it back in and... hangs on blue swirl logo (slow) just as before. Wiggled it around a bit in the connector and it finally started working (again). I still don't trust this thing - I'm now thinking it 'may' be down to how you plug in the GDEmu and the slightest move will knock it out of position and cause the eternal slowdown thing that keeps happening - that's what it felt like when I got it working now. I dunno. I'll keep it for 1 game at a time and use it like that. The corrupt SD cards have also been a constant problem... even though the cards are fine.
Top

I had my bios start up screen play super slow before. I cleaned the motherboard PSU pins with some fin grit sandpaper to remove the 20 years of oxidization and that fixed all issues I had with the GDEMU. Worth trying here to see if it helps. Even with the new PSU you should try this.

This is a photo showing the area where you could see the bad soldering (two connections appear to be bridged together in one big blob - it's quite obvious when you look closely) This is a photo from the web - it's just to show the specific spot - the area with the big green circle.

I did give the motherboard a thorough dusting and a good clean. As I said above, I'm okay to use it with one game at a time but I wouldn't trust this particular PCB with a library of games on the card - I've already had to format/install games about four times now since I got my GDEmu clone, and each time it would work for a while and then stop working. The annoying thing is that it could be anything from a bad port connecting the GDEmu to the Dreamcast, a software problem with SDCard Maker, a badly soldered GDEmu clone... I can't rule any of them out at the moment.

If there's anyone else who's had this problem - could they check the pins around the chips on their GDEmu to see if the are bridged connections (or just bad soldering in general) We need more input from other people with the same problems. I know I'm not alone with this...
Top
Post Reply
26 posts