2018 and counting- Doom for Dreamcast Online

peanut_unlimited wrote:Awesome work scaryred24 and Shuouma, always blows me away whenever I hear of a new title being brought online. Cannot wait to see how this goes

Thank you so much but you know I only made suggestions for a few pwads. I'm sure you might know what I added into it.

you should get a nice collection of the top deathmatch maps

how does heretic and hexen work?

Firstly that totally slipped my mind as I'm more of a cooperative person than a deathmatch player. I'm sure we are not going to be getting things like AeonDM anytime soon.


Secondly Heretic is more or less like Doom but with an inventory system and true y axis aiming. It wouldn't be hard to add that in but then again I doubt it. Hexen uses a lot of acs scripts for things that the build engine could do and is your much more fleshed out experience. So I want to say just doom and maybe Hacx. Freedoom could be an option if the current status of development wasn't shifted to Boom Compatibility.
My Steam Profile (from SteamDB)

Oh V20. It takes me back to a time when anything exploded, my PC dropped to its knees. Over the years I've gotten so many contacts that I now work with Sargent Mark IV. Now only if v21 didn't require Zandronum 3.0 as the bare minimal, this could have easily happened, minus the blood and complex gore system.

I mean its not like I wasn't doing anything when I was inactive here for about a year or so. 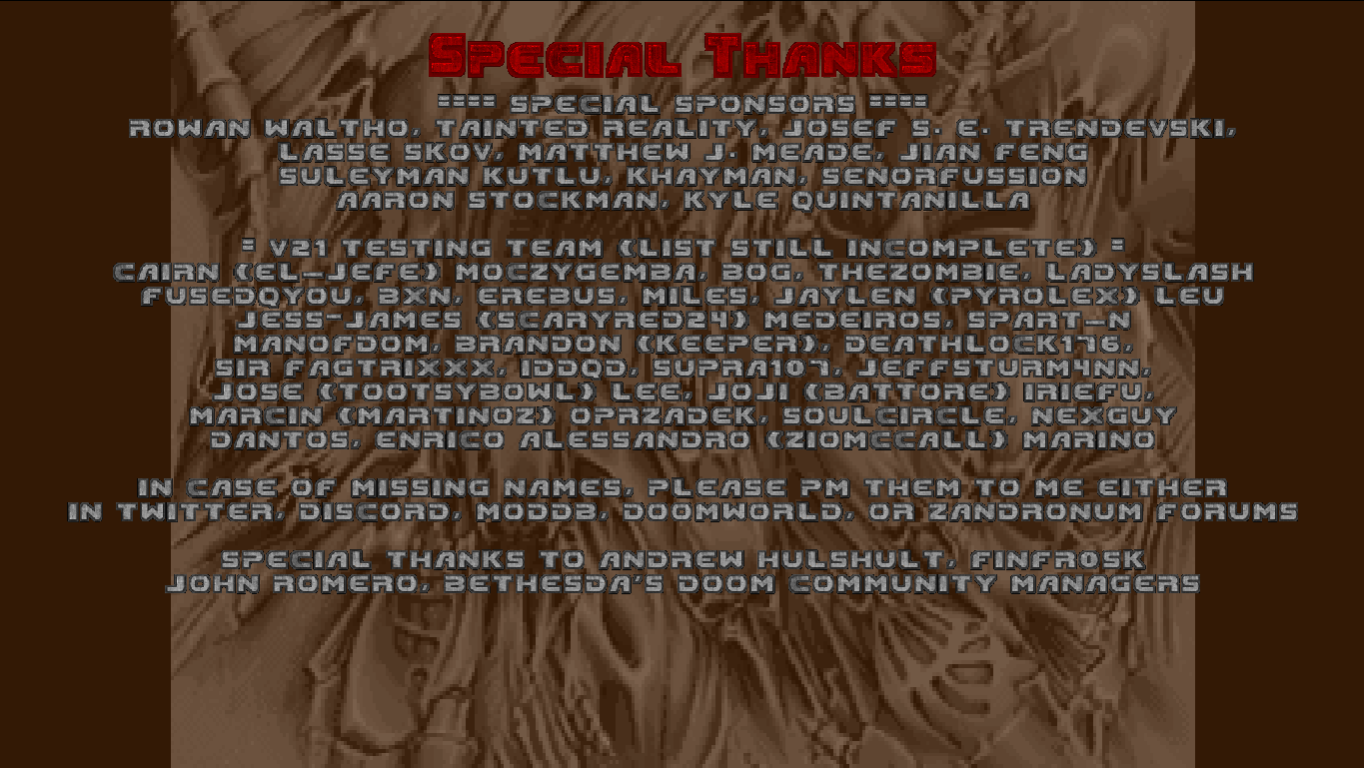 Anyways I can't wait for this to come out. I'll be burning a disc ASAP for when it does.
My Steam Profile (from SteamDB)

copy and paste form over at Online Consoles, post from LN. Apparently he is trying Doom online without success. I look forward to a new CDI coming out, I hope that will remedy the connection problems everyone has had trying to do this.

I have never played Doom online against another user on the Internet before (only against myself in a LAN). With my new testing setup in full swing, and the ability to setup multiple Dreamcast's, curiosity got the best of me, so 2 weeks ago I decided to test out Doom online.

NOTE: To clear up some confusion, OC's Doom Online Guide is simply a cleaner version of what is already provided in the readme files that are bundled with the DCDoom zip provided by ChillyWilly. I just re-wrote everything, put stuff in a grid, and added colors. Doom Online for the DC is a port of ADoom which traces back to ID Software's own Linux Doom source code, and works like the PC version, even down to the default port of 5029 (this is a PC DOOM standard). No special extra information is provided in the guide on this site. Its just easier to read.

Previously successful networking tests were based on following ChillyWilly's original bundled readme files, and only performed in a LAN environment. So I wanted to see if it was possible to play against another user online. All new attempts failed. I tried to play against two seperate users online 1vs1 Deathmatch, with the same results. The match would either stall at the terminal log on each system, or the client would leap to a pixelated/distorted view of a match. Menu's can be traversed if you hammer escape on the keyboard, but they sort of overlay on top of one another making it hard to change any settings. The game seemed "glitched".

It should be noted that User A attempted to play against users B and C seperatly, but users B and C did not attempt a connection together. So there could have been a problem on user A's end.

I did multiple successful LAN tests in 2012. So I figured I would replicate that again to rule out any anomolies.

I re-tested Doom in a LAN using:

It is not working for me as of right now in a LAN environment. So I am chalking it up to an order of operations issue? or some sort date driven code errata (highly unlikely)?

I also tried 3 different routers to rule out any network issues, and used the same router that I tested this with in 2012.

Here are my configs:


I tried many startup operations, like starting the host, waiting until it says Checking Network Status, and then starting the game with the client. Also starting them at the same time, etc. None succeeded.

Hopefully this information helps someone else. I figured if its possible for me to have DCDoom working/not-working at different intervals that others are also running into challenges in the configuration process. Smile

Would also like to know if there has been any further tests on this as I would be happy to help try
Online Games: PSO | Quake III Arena | Toy Racer | 4x4 Evo | Starlancer | Planet Ring | Maximum Pool

Sent from my Pixel 3a using Tapatalk
Top

Thanks for finding this. I never seen footage or gameplay of this, I was always interested in playing this because it had online. I'm just wondering how he got it to work. Like burn it because I tired many times and never got it to work. This footage makes me happy to see. I haven't heard much of any process being made to the game so I kind of thought it was dead but now I have some hope. I hope we all can play this game together online

Return to “Doom for DC”