You know the mp3 or mod music was disabled before release be nice to re add it back they said it had a stutter now compiling this i guess it's kos1.1.6 or before might give it ago
https://www.youtube.com/channel/UCeVCRA ... whHyKp6OsA my youtube channel
https://www.patreon.com/ImrTechnology support for my work
https://discord.gg/ZHb4rCq
https://soundcloud.com/ian-micheal-47914919/ my band
https://twitter.com/IanMicheal10
https://github.com/ianmicheal

there was also the sandman homebrew menu. it might be called something else but it was the menu made for the sandman disk. i think they even made a mod for a christmas theme too? maybe they used dreamon? there was a menu that was made by some folks at dcemulation i remember reading about it. sandman?

SMiTH wrote:there was also the sandman homebrew menu. it might be called something else but it was the menu made for the sandman disk. i think they even made a mod for a christmas theme too? maybe they used dreamon? there was a menu that was made by some folks at dcemulation i remember reading about it. sandman?

You got me with that one never herd of that..

I think no one has ever got inducer to compile if i can maybe update it to use mp3 for music I know it used kos1.1.6 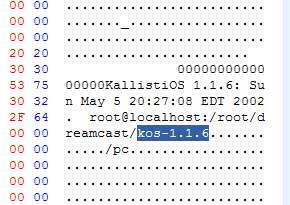 I was able to get it to compile build and boot but it's messed not displaying the pngs there some were libgail thing because it uses the ta not the pvr to texture rather hard for me to understand it anyways i can post the compile-able src but it needs kos1.1.6 and a tool chain was quite a bit just to get it to build it does boot just a green and black screen yet on debug seems to work
https://www.youtube.com/channel/UCeVCRA ... whHyKp6OsA my youtube channel
https://www.patreon.com/ImrTechnology support for my work
https://discord.gg/ZHb4rCq
https://soundcloud.com/ian-micheal-47914919/ my band
https://twitter.com/IanMicheal10
https://github.com/ianmicheal

here is the source hacked to compile stock kos1.1.6 it compiles builds boots but display is messed

SMiTH wrote:well, i don't know if every game will work but for all of the retail games i have tried adding to a multidisk using ginsu it has always worked. so I don't see why all other multi menus would'nt work the same. i bet the compatibility is similar to loading games in dreamshell because allegedly dreamshell uses ginsu loader or something similar to load bins or at least i think it does. just remember each .bin need to search for cd00 and then 8 spots from left edit value to 5c 2e for 11702 lba or 6e b0 for 45000 lba.
if it is a wince game then bincon 0WINCEOS.BIN to 1WINCEOS.BIN then edit lba.
If it is a homebrew .bin use binchecker to descramble or use descramble.exe.
http://download.sizious.com/dc/bincheck/bincheck-2.0.7z
once the bin is descrambled then edit the lba in hex editor.
If you can't find cd00 either bin is encrypted or it does not need lba edited.
keep in mind even some of the bins that have cd00 might not look like they need be edited but they do.
so anytime you find cd00 in a bin always edit the lba!
also some games dont use bin for the main game executable i.e pso v2 (uses dp_address.jp or w/e) and i suspect 2k series games???
also if you cant find raw files for homebrew and you can only find the .sbi file, simply use .7z and unarchive the .sbi to get the .bin file

If a game doesn't want to load try any of these edits to the main bin:

I used it for Scummvm.bin and I managed to launch it from the menu method that I use in the compilations

it looks like there is a limit for how many .bin files that can load using ginsu.
i want to say it was like 30 bins? might have been a few more or less.
this was when using ginsu loader without any extra stuff.

*maybe with generator disk more bins could be used? since the menu scrolls and has animations?
idk maybe i will test and see if it has a limit?
but as far as ginsu loader main files with no gui, and a simple menu text only etc.. there is a limit for bins.
basically it fills the whole screen from top to bottom and you can't select anything once you goto very bottom of screen.

more than likely sbi builder will allow more than 30 bins?
i will test it eventually.

if there is a limitation as to how many bins can load with sbi builder/ginsu/dreamon/odcm etc then if some1 could modify the damn thing to 255 that would be good.
this way when making a multi disk you could build an iso up to 2gb with tons of bins and gdemu/null dc users could use them.
then for cdr users you could still fit quite a few bins to 775mb or w/e
the project i've been working on for months is like 45 bins lol and i still have 250mb of space available for cdr.

**i tried to load ginsu twice and that doesn't work... so trying to split the bins in multiple folders to seperate them once limit is reached is no bueno.

tl;dr there is a limit to the amount of executables that can be loaded using various dreamcast menu/loaders

The method for the compilations with the navigator that I use allows to launch more than 30 games. When we look for example at the compilation of Toodles, each game can launch with 6-7 different music. We are more than 50 games I think.
Top
Post Reply
98 posts