Forum rules
Please check the other forums in the Dreamcast section before posting here to see if your topic would fit better in those categories. Example: A new game/homebrew release would go in the New Releases/Homebrew/Emulation section: http://dreamcast-talk.com/forum/viewforum.php?f=5 or if you're having an issue with getting your Dreamcast to work or a game to boot it would go in the Support section: http://dreamcast-talk.com/forum/viewforum.php?f=42
Post Reply
36 posts

I have a Quantum Fighter Pad and really like it.
Top

So far every 3rd party controller that seemed to look cool so I took a chance with it turned out to be a cheaply made, badly designed useless piece of crap. So OEM for me.
Top

I find the madcatz the most comfortable. But the quality has never really wowed me.
Top

I've tried a few out. Some of them seemed slightly better than the DC pad in a minor respect, but the main DC pad wins out for me for all around quality.

-Madcatz pad - had a very good joystick, but the dpad was mushy and terrible and the buttons were kind of mushy
-astropad - I disliked how the joystick could "spin" on it (maybe it was just my friend's that was broken?), the design was also comically bulky but maybe that makes it cool in retrospect

this guy on reddit.com got an xbox1 controller working on the dreamcast with 2 dongles... Maple is badasss
https://www.reddit.com/r/dreamcast/comm ... ource=link 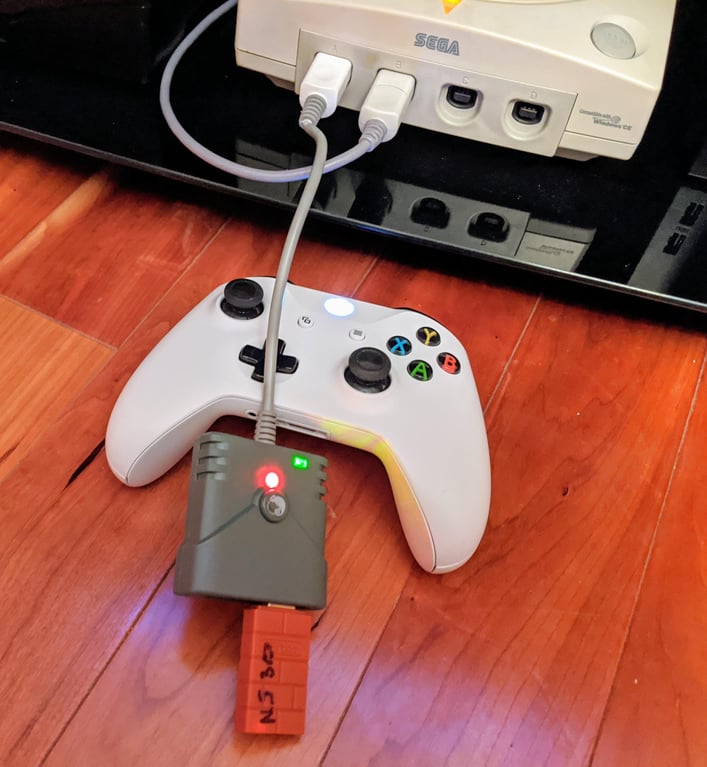 Expensive setup but hey the real guys to blame is on Microsoft for not making all of the hardware they put out Dreamcast compatible!
Top

Though I own some 3rd-party controller(s) which I haven't tried, of all of those that I have tried, the white and blue MadCatz Dreampad is my favorite. The extra texture of the pads on the sides and the analog are really nice (one might even say luxurious) and help to prevent sweat-slip.

However, I wish that the MadCatz Dreampad's D-pad was properly aligned like other controllers instead of being turned something like 15 degrees off from a North-South alignment compared to the controller's mid-center. I also wish its face buttons were arranged in arcs like a Saturn game-pad instead of being like a standard DC game-pad yet with C and Z added at an odd steep angle.
Top

it is bad option
This adapter is passive, it is only suitable for dual-mode mouse
Dual-mode mouse are very rare
Top

Ive seen that! Im trying legacy hardware like a madman! ALLBUSH is kiillin it on Q3! we need a 1 UP!!!
Top

They do make, or did make, a ps2 optical mouse.
Top
Post Reply
36 posts