correct me if i am wrong, last blade for dc does not work in vga mode?
so then your dreamneo version is better than official dc release.

SMiTH wrote:correct me if i am wrong, last blade for dc does not work in vga mode?
so then your dreamneo version is better than official dc release. 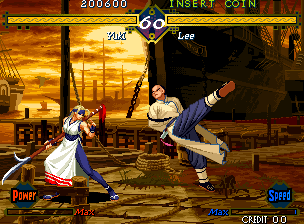 Finally, the game runs fast on the NGCD hardware. I have played other 2d fighting games on the Dreamcast and the Playstation, and no other console game system runs fighting games this smooth (except for the arcades themselves and the AES).

For ease of use, combos, fast game play, and tight controls, The Last Blade stands apart from other fighting genres on the NGCD.

I agree with this..

For an NGCD game, The Last Blade deserves a 9. There are few NGCD games that make me completely forget about the loading. When playing The Last Blade, in spite of the worst load times in a game, I honestly do not notice it.

I also think that most players will adjust to the loading. There are plenty of things to do while waiting with friends. One can drink a beverage, consult moves lists, and chat with his or her friends.

As well as a great party game, The Last Blade is fun in single player mode. There are plenty of items to unlock, and all of them are worth it. Even if I owned the AES game, I could not imagine giving up the unlockables in the CD version.

I recommend this game to everyone. It allows one to select many languages including English and Spanish and is very user friendly.

The Last Blade is the best blade there ever can be.

And last blade 2 neo geo version with emulator has vga

Pitty is the way it loads still annoying even on Dreamneo it's a lot faster then the real machine but still lot of load times I have tried to speed that up with asm prefetch and larger buffer for file loading seems to help but not that much few sec like 3 sec faster
https://www.youtube.com/channel/UCeVCRA ... whHyKp6OsA my youtube channel
https://www.patreon.com/ImrTechnology support for my work
https://discord.gg/ZHb4rCq
https://soundcloud.com/ian-micheal-47914919/ my band
https://twitter.com/IanMicheal10
https://github.com/ianmicheal

This is the new style the press start flashes loading dont go over the image and it's easy to make.. Center is 459x291 just resized screen shot of each games title screen..
You can Still use this screen to swap in the real neogeo cd cdrom and load it not just SB or download isos, making it very much like bleemcast
bootdisk style no fuss no settings I will make the build for each game to be the best it can be .. not like overall emulator that be slow or fast on some..
mock real port like those sold over the last few years

So... is that Pulsar working well?

Bin size down to 600kb for the emulator